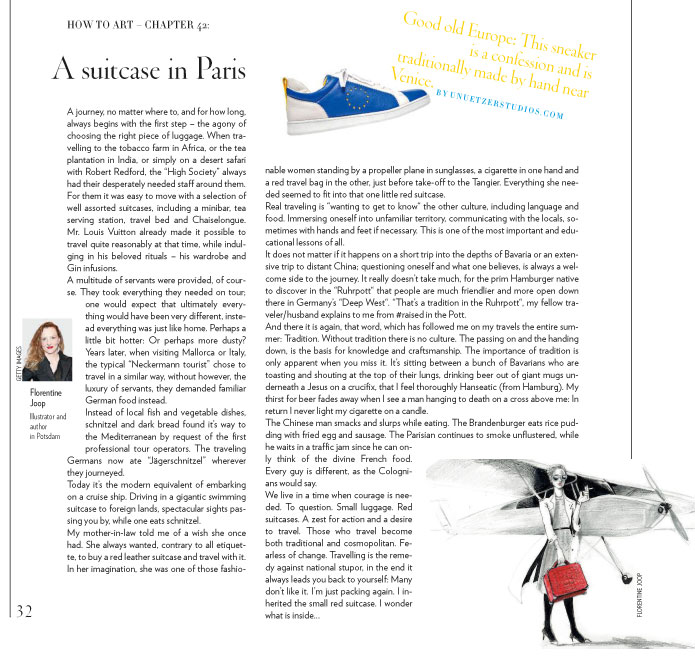 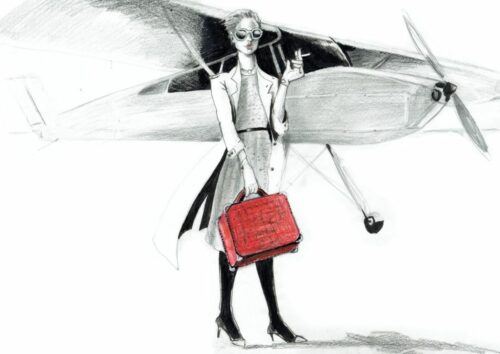 A journey no matter where to and for how long always begins with the first step AND the question which piece of luggage is suitable. The “Hautevolee” had their desperately needed staff around them, when travelling to the tobacco farm in Africa or the tea plantation in India, or simply on a desert safari with Robert Redford. For them it was easy to move with a bunch of well sorted suitcases, including minibar, tea serving station, travel bed and chaiselongue. Mr. Luis Vuitton made it possible to travel reasonably and independently from local circumstances, to celebrate and enjoy the cherished rituals of maintenance, wardrobe and Gin infusions, no matter where. An uncountable number of servants provided, of course. They took everything they needed on tour, so that ultimately where everything should have been totally different, everything was totally like home. Maybe a little bit hotter. Or more dusty. Later, the typical “Neckermann tourist” chose to travel quite similar. Only, rather than carrying everything with them when visiting Mallorca or Italy, because of a lack of servants he or she now demanded familiar german food directly on site. Schnitzel and dark bread found their way to the Mediterranean by request of the first professional tour operators, because they had no confidence in the German´s culinary world openness. Instead of wholesome and regional fish and vegetable dishes, the traveling Germans now ate “schnitzel with hunter sauce” wherever they roamed. The modern equivalent to this seems to be embarking on a cruise ship, which somehow became mass appealing recently. Sitting in a giant swimming suitcase, surrounded by all needful things, traveling to foreign places, boating along land marks while eating your “Hunter-Schnitzel”. Without ever leaving the comfort zone or really getting to know the land and the people.

My mother in law told me that she always dreamed of a red leather suitcase. She wanted to buy one to travel around the world with it - totally in contrast to etiquette. In her mind with this red suitcase she would turn into one of the sophisticated ladies, with big sunglasses and cigarette, waiting in front of a propeller plane which soon would be starting to Southern France. Or Tanger. All she needs seems to fit in that little red piece of luggage.

Real travelling in my opinion begins with being away from everything I am used to. The new-modern getting-to-know of a different culture, including language and food. To immerse into foreign places and communication with people, with hands and feet if necessary, is one of the most important education lessons per se. It does not matter if it happens while on a short trip into the unkown depths of Bavaria, or during the journey to far far away China, that you begin to question yourself and the so called save knowledge you kept in mind for so long. The brittle Hamburger will at once recognize that the people of the “Ruhrpott” are generally more friendly and outspoken. “That is tradition here in the “Deep-West””, quotes my beloved co-traveler slash spouse hashtag raised_in_the_Pott. And here is the word again which is following me through my travels this summer: Tradition. Without tradition and the passing on of knowledge there would be no culture and no crafts. Without tradition each coming generation would have to invent the wheel all over or how to make fire or how to craft a handbag you can pass on generations. The importance of having traditions shows when they are missing. Between a bunch of Bavarians, toasting and shouting while drinking beer out of giant mugs underneath a looming dying Jesus on a crucifix, I am feeling hanseatish through and through. I am really sorry, but as a Prussian, I feel a traditional rejection against abundantly clear shown religiousness. My thirst on beer passes away when a man is hanging to death above me. In return I never lighten my cigarette on a candle, ever, because then a sailor has to die. Actually, I don´t even smoke anymore, so no one has to die at all because of me smoking. The Chinese slurp while eating. The Brandenburger eats his rice pudding with sausage and fried eggs. The Landscape Park in Duisburg is an old industry site, because in “the Pott” industry is culture. The Parisian smokes unflustered while he stands in traffic jam, since always, but the food is divine. Each “Jerk” is “jerky” in his own way, the Colognians say. Through traveling one learns the traditional differences between folks but - above all - what seems to be the true and similar inherent. The difference between changing and obtaining traditions. Traditionally no Parisian understood anyone trying to talk French. It´s completely changing. Now no one understands anything, anymore. But they are super friendly. Conversations with “KOLs” softly meandering between English, French, German till all agree on LOL. Influencer traditionally talk only to their followers via # or to other influencers via #livestream. Traditionally the Italian Mamas and Papa cuddle and kiss their children, even the grown-ups, and call them. “Amore!” The typical resident of Brandenburg is more or less taciturn and calls his children: “Catch up!”
Everywhere I go people stick to communicate face to face despite smartphones and smileys, because it is still the only chance to reach somebody, truly.
I imagine my mother in law, strolling through Paris with her red suitcase. Maybe she sits down in a café on Montmartre looking at Sacre Coeur and starts a conversation with a French filmmaker. He mentions her beautiful legs. That is totally tradition as the French men will always mention the beauty of woman. What might be in that suitcase, he speculates in his mind. Maybe they together drive to the Atlantic coast?

We need courage in our days. Questioning. Small luggage. Red suitcases. Drive and yearning for travel. Greta sails over the Atlantic Ocean, because nothing ever stands still and everything will change in the future. Who travels becomes traditional and cosmopolitan. Loses his fear of change. Borders will disappear, go fuzzy, becoming a arbitrarily chosen parting lines. Travelling is a universal remedy against nationalistic tedium. Travelling in the end will always lead you to yourself. Not everybody likes that. I like it a lot! I am currently packing again. I inherited a little red suitcase. I wonder what is in it…